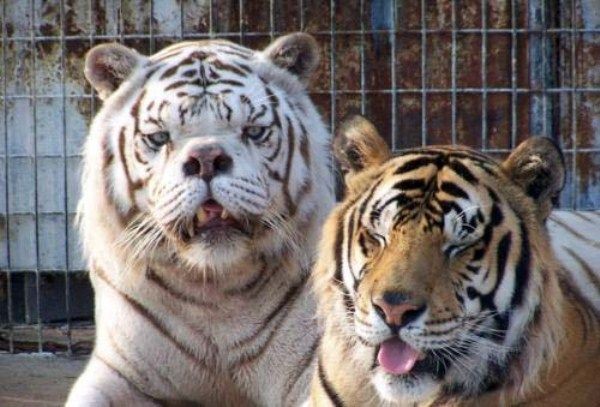 White tigers are endangered species. There are only few of them, which is why inbreeding is practiced in order to protect their kind. This is done by breeding brother to sister, father to daughter, mother to son and so on. While there’s a chance to produce a white tiger from breeding one with an orange tiger, the percentage is very slim. The ratio is 1 white tiger can be produced in 4 cubs. While inbreeding white tigers can keep the species of white tigers alive for the next generations, this could also lead to various conditions, defects and negative effects to the offspring including down syndrome on tigers. Here are some of them. 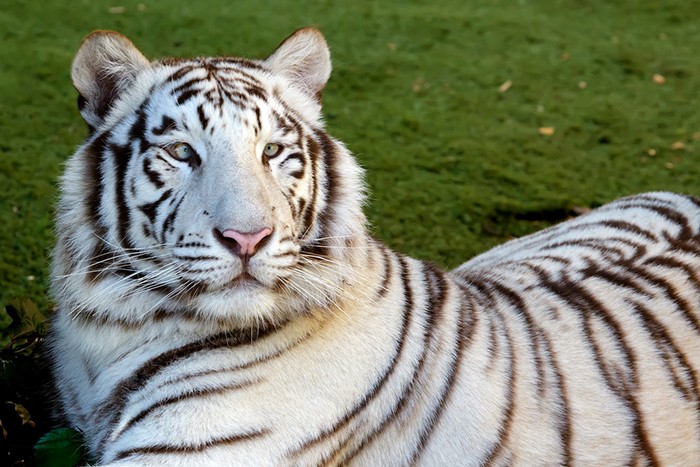 All of the white tigers have this eye condition, whether it is obvious or not. The reason for this is that the gene that causes the tigers to be white is also the culprit for wiring the nerve of the eye to the wrong side of the brain, thus resulting to them being cross-eyed. Due to their eye problem, they tend to be more dependent to their owners or masters. 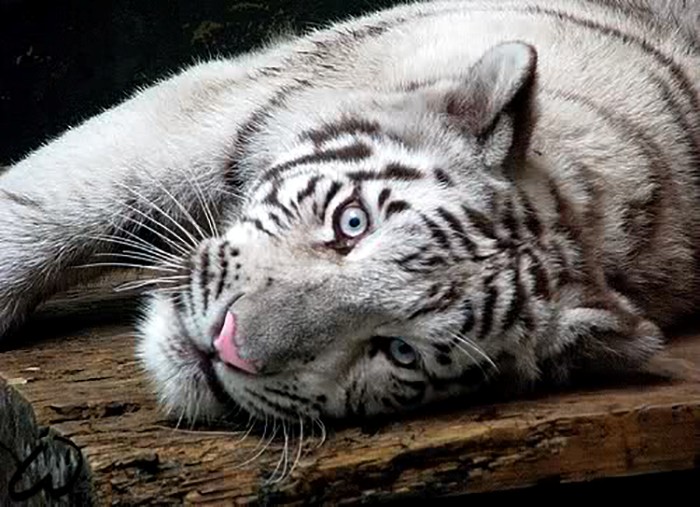 The immune system of most white tigers is not as strong as those that were not inbreed. If their immune system is compromised, it would be easier for them to get sick, which could eventually lead to death. This is why many white cubs die at their young age. 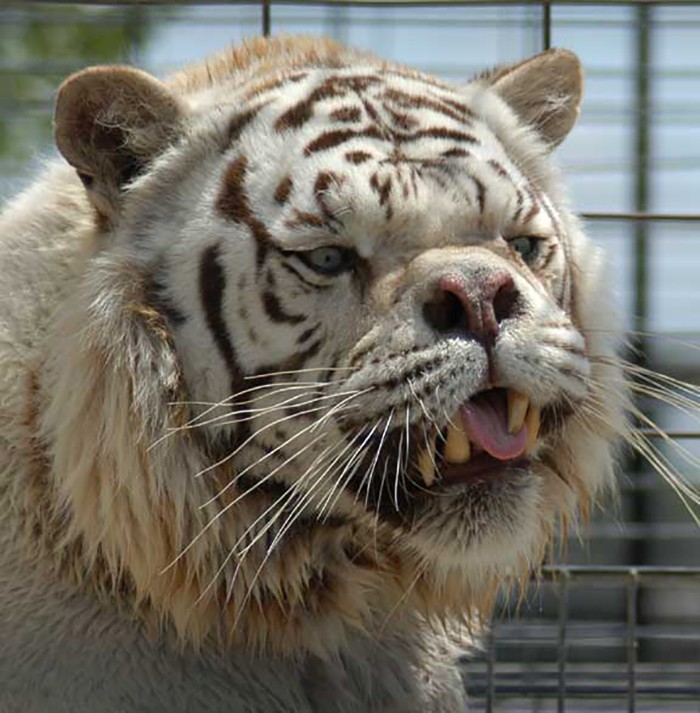 This is a condition in which there’s a gap or opening on the roof of the mouth. The abnormal development of the cub while inside the mother’s stomach cause this. There are also causes in which cubs don’t have palates at all. Cubs with this condition would have difficulties nursing and they could easily drown as the milk could get into their nose. These cubs are often euthanized.

Scoliosis of the Spine 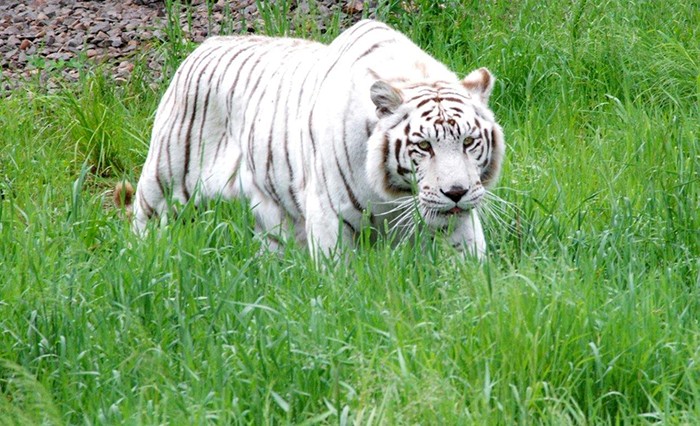 This causes the backbone to curve instead of being straight and the condition can be mild to severe. It could have a huge effect on the tiger’s life as it could cause difficulties in breathing, swallowing, digesting and doing regular activities. Pregnancy can also be difficult for female white tigers with this condition. 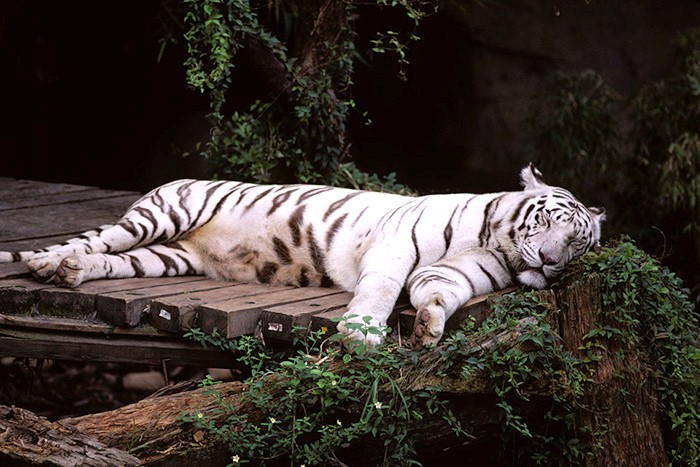 Because of the various deformities and health conditions that white tigers have, they may not live longer like the average tigers. As mentioned, Kenny the tiger with down syndrome died at only 10-years old. Not only that, many of his siblings died at a young age, while others were stillborn or they were dead when they were born. 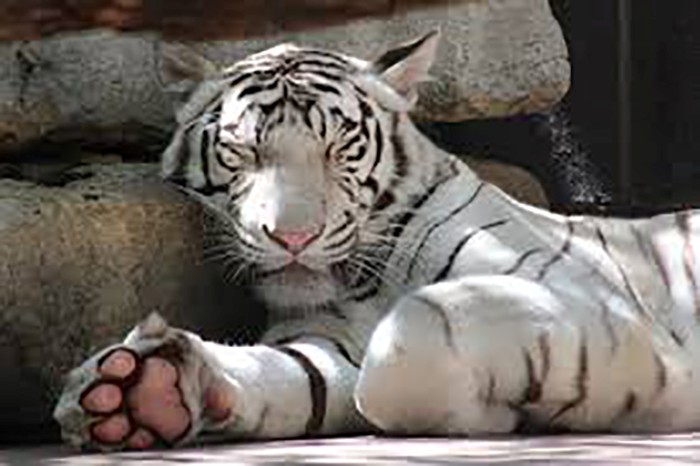 While it may sound like this type of phobia is a fear for photos, this is not what it means when we talk about the white tigers. This means that their eyes are sensitive to light due to the incorrect wiring of the optic nerve to their brain. For this reason, when they are exposed to light, they may feel uncomfortable or even pained due to photophobia.

This is a degenerative disease affecting the movement of the white tiger. Shaking, hardening of the muscles, slowness and movement difficulties are some of the most common symptoms of this. Since this is a degenerative disease, it means that it would worsen over time and it could greatly affect the life of the tiger. Overtime, its effect may no longer be just in its movement, but in its behavior and brain as well. 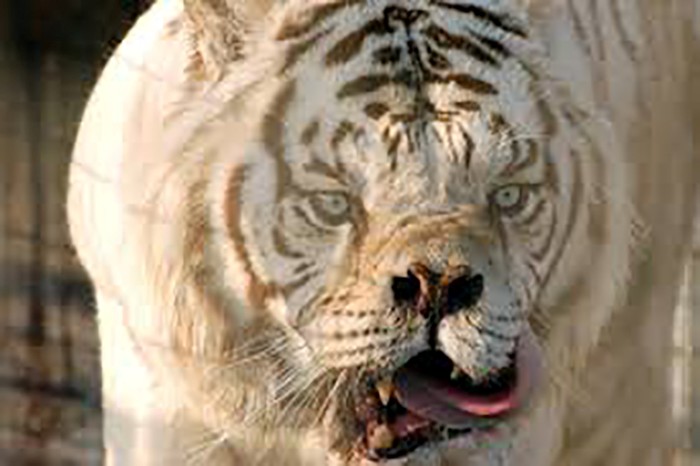 This is also very common to inbred white tigers. We’ll go back to Kenny once again. He is an example of these deformities as he has the features of one with down syndrome like its large skull, face that looks like a bulldog and eyes far apart. Other facial deformities include crooked stick that are sticking out. Since white tigers are usually raised and bred to be displayed to the public, those with deformities are usually destroyed since they cannot be presented due to their looks. 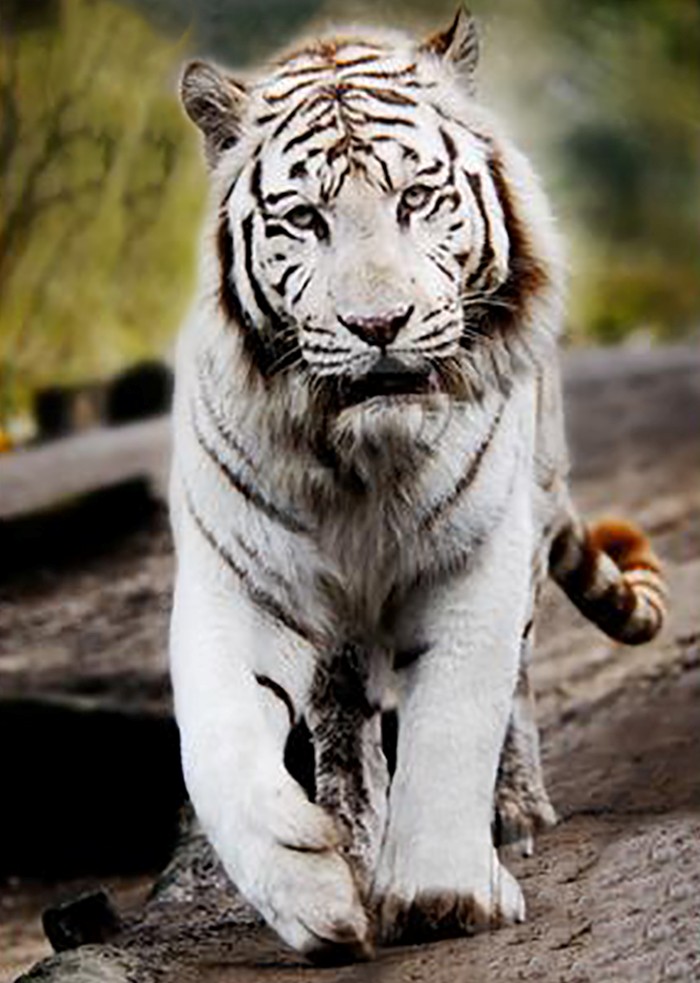 This is a defect on the feet in which they may be turned inwards or outwards. Due to this deformity, it wouldn’t be possible for them to walk straight with their feet. Rather, they may either walk on their ankles or on the side of their feet. Like those with facial deformities, white tigers with club could be destroyed. 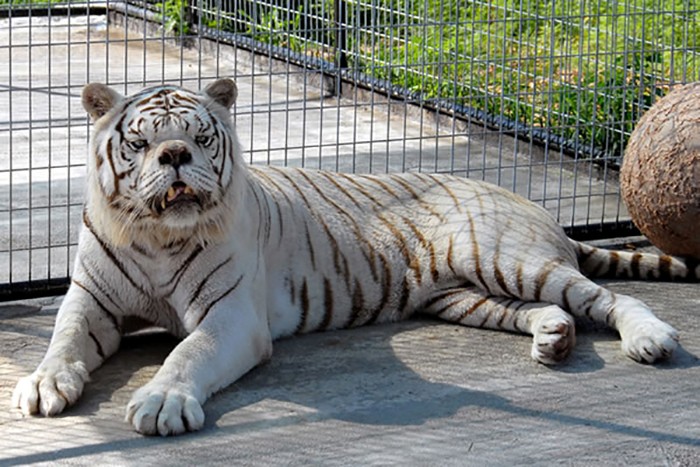 A white tiger named Kenny was known to be the first tiger with down syndrome. Its facial features resemble that of one with this condition, although this is still being debated since it results from a third copy of chromosome 21, when tigers only have 19. Nevertheless, aside from his down syndrome features, he also had limited physical capabilities and he died at 10-years old, which was half the lifespan of an average tiger in captivity. His parents were brother and sister.

Although white tigers are rare, do you approve of their inbreeding even if it means that the cubs would most probably have these defects and conditions?

A cinder cone is a volcano contained volcanic cinders (small particles of hardened lava).  A straight shot of lava in the air is caused by gas bubbles that erupt from a vent. This fire fountain can create hundreds of meters of the high shot. When lava erupts from a vent, it will quickly cool and fall nearby vent. By the time, the one is formed from this event around the crater. For more information about cinder cone, I summarize the cinder cone volcano facts.

The simplest type of volcano is cinder cone that can be free-standing volcanoes. The cone created by this eruption only contains a pile of particles which includes the flowing of lava. Unfortunately, the cinder cone cannot stand high like other volcanoes which are rare to have height until 250m. Besides, the creating of cinder cone itself is also influenced by factors surrounding including the gravity and atmospheric pressure. The cinder cone formed in Mars, for example, seems twice bigger than the earth have as the lower atmospheric and gravity will push the particles over a larger land. Many countries also have famous cinder cone like:

Since the cinder cones height is not high compared with volcanoes, the eruption is also the small one. The lava will erupt from the small vent which come up into the air. During the eruption, a beautiful sparkle looks dramatic when the eruption happened.

Unlike mostly volcano which needs hundred years, the cinder cone doesn’t need a long time to develop. One of the most famous cinder cones is Paricutin. The eruption happened in 1943, but shockingly the cinder cone formations can be built only in 9 years to reach such a wonderful high, 1,200 feet. Another great fact about cinder cone is Mauna Kea which is located in Hawaii. The volcano has 100 cinder cones around the mountain.

The Effects of Cinder cone to human population

As the cinder cone cannot create a high eruption as volcanoes do, still it will produce ash, smoke and gas. Some bad effects still appeared like the Paricutin in 1943 which cover 100 square kilometres of farmer’s field in nine years. Five villages were covered by ash and rock and several hundreds of people should be saved to new locations. However, a small eruption like the Little Springs Volcano’s didn’t occur a displacement, the communities take advantages by farming as the ground after the eruption happened is quite good and fertile.

Aside from those advantages and disadvantages, people surely must be careful of the eruption which sometimes cannot be predicted to avoid victims. Indonesia is one of the countries which has many cinder cone.  Bromo is one of the active cinder cones. People thought if this cinder cone is not active, but in 2004 a sudden eruption happened and killed two tourists tragically.